Most men – if they live long enough – suffer from BPH (Benign Prostatic Hyperplasia). BPH is the swelling or enlargement of the prostate which occurs naturally in men as they age.

How does BPH occur?

The innermost layer of the prostate – the transitional zone – gradually begins to swell in middle aged men and is a normal part of the ageing process. An enlarged prostate begins to cause problems when it interferes with daily activities.

Why is BPH a problem?

The prostate gland is situated between the bladder and the penis. The urethra – which transmits urine from the bladder and semen when we ejaculate – runs through the centre. An enlarged prostate can cause the following issues because of its location in the body:

• Difficulty urinating -BPH gradually compresses and narrows the urethra making urination slower and more difficult.
• Increased night time urination – when the prostate enlarges upwards it alters the shape of a valve at the bottom of our bladder. This valve is more affected when we are lying down making night time urination more frequent. 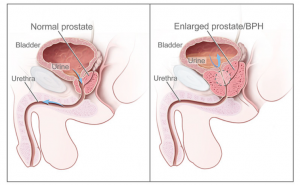 What Are The Symptoms of BPH? 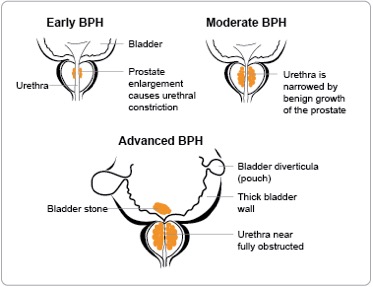 What are uncommon symptoms of BPH?

If you are experiencing any of the below symptoms it is recommended that you visit your GP.

• Blood in the urine –  should be checked with your GP but it can sometimes be caused by BPH.
• Pain on urination – likely to be due to infection or inflammation and needs to be investigated.
• Pain on ejaculation
• Frequent urination – This may be diabetes if associated with thirst and drinking a lot of fluids.
• Lower abdominal pains